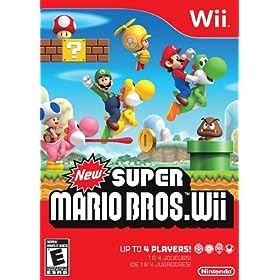 Developers at Nintendo have dreamed of creating a simultaneous multiplayer Super Mario Bros. game for decades. The Wii console finally makes that dream come true for everyone with New Super Mario Bros. Wii. Supporting 2-4 players in side-scrolling co-op and competitive platforming action, and featuring a mix of fan favorites and new characters, new powerups and various input options via the Wii Remote, it is destined to become an instant classic in one of the most b (more...)